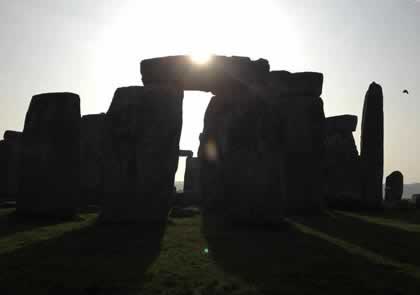 On March 24, 2012, ISE travelled to the Salisbury Plains in England to participate in a gathering for crystal skulls and caretakers at Stonehenge. There were many people who travelled from all over the world to be there. Australian, American, Dutch, German, and English crystal skull guardians converged on Stonehenge for the ceremonies which were set up to correspond with the Spring Equinox time.

We gathered together with our skulls and co-creative efforts. Rhian and Rens Kivits organized the event in conjunction with a celebration of their hand-fasting at the Chalice Well in Glastonbury. On March 20, they also organized a conference for Mongolian and other special crystal skulls called Anchoring the Energy of Shambhala in the Heart of Avalon. I presented on "Portals and Immortals: Mt. Kalaish and the Crystal Skull Realms of Inner Earth and the Cosmos." Bart performed on his native flutes and did a crystal skull activation. There was a Mongolian throat singer and ceremonies, activities, and meditations by many speakers, healers, and musicians.

The ceremonies at Stonehenge were complementary to the other events, but were also meant to stand alone. My partner, Bart and I, were invited as a couple to help lead the ceremonies of the day, along with Rhian and Rens. Included in the schedule, were inspired words shared from those who could not physically attend on that date. Linda Frisch, for example, who lives in New Jersey, USA, had her poetry and channeling read from two of her ancient Himalayan skulls. Rhian opened and closed the sacred space in ceremony and Rens shared a communion of cakes and mead for everyone. Bart shared a meditation with his flute and Q'ero Inca shamanic rites. I lead a silent meditation so that people could in her or his own connect with Stonehenge and the crystal skulls present and at a distance. Together, Bart and I lead an Inca Despacho ceremony to give thanks in gratitude to Mother Earth and Stonehenge as an offering from everyone present. The earth and spiritual energies were very high during all the ceremonies and we deeply felt them pulsing through our bodies and all the crystal skulls, both ancient and modern.

One of the special features of this trip to Stonehenge was the introduction of Esus the Preseli Bluestone skull to Stonehenge and the other crystal skulls and caretakers present. Along with Mark, I had the honor to ceremonially present Esus the Preseli Bluestone Skull on his first trip to re-connect with the ancient bluestones there.. Esus is a crystal skull who was carved from the bluestone of the sacred Preseli Mountains in Wales. He represents and holds the energy of the Preseli Consciousness. Esus was carved in 2011 and resides with his guardian, Neil "Blue" Clark, author of several books about bluestone and the Preseli Consciousness and sacred landscape of Wales and Stonehenge. Bluestone is considered highly energetic and healing with a connection to the stars and the original inner stones of Stonehenge. The mystery remains with many scholars and meta-physicists still trying to answer how and why the sacred bluestones were specifically transported over hundreds of miles from the Preseli Mountains.

While we were only allowed to stay inside the ring of Stonehenge for one early morning hour, we were still able to experience many wonderful energies. The combination of Stonehenge's power and the amazing crystal skull council present aided in the exponential increase in levels of consciousness and energy in such a relatively short time. Of course, we were in a sacred space out of time… but we still needed to mind the clock. Everyone felt the high levels of energy in his/her own way. To testify to this fact, many photos taken during the ceremonies show orbs and swathes of beautiful colored energies.

It was a beautiful and once in a life-time experience and one which we won't soon forget. We are thankful to be part of such a powerful gathering to honor the earth, Stonehenge, peace, the Mongolian and crystal skulls; Esus, and everyone present physically and with us in spirit.