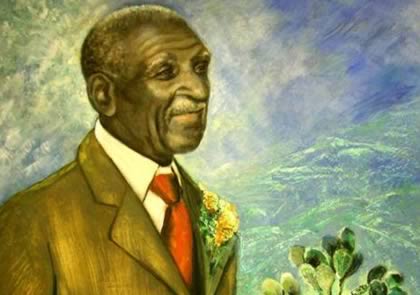 George Washington Carver was an American scientist, botanist, educator, and inventor, as well as a mystic. The exact day and year of his birth are unknown; he is believed to have been born into slavery in Missouri in January 1864. His native Missouri was less than hospitable to Carver, who was destined to become one of our most cherished scientists.

Carver and his mother were kidnapped by a band of roving thugs, who carried them off to the South. Although he was later found and returned to his birthplace, Carver's mother was never located and he was forever separated from the only parent he ever knew. Despite these inauspicious beginnings, the tragedy in Carver's life is largely overshadowed by one of the most captivating rises to prominence ever accorded an American hero. Most highly celebrated for his discovery of the varied uses of the peanut plant, of which he listed over 300. Carver was more than a botanist or chemist. For nearly fifty years he was a professor of agriculture at Tuskegee Institute.

In 1887, at Tuskegee Institute, Carver developed his crop rotation method, which alternated nitrate producing legumes-such as peanuts and peas-with cotton, which depletes soil of its nutrients. Following Carver's lead, southern farmers soon began planting peanuts one year and cotton the next.

While many of the peanuts were used to feed livestock, large surpluses quickly developed. Carver then developed 325 different uses for the extra peanuts-from cooking oil to printer's ink. When he discovered that the sweet potato and the pecan also enriched depleted soils, Carver found almost 20 uses for these crops, including synthetic rubber and material for paving highways. The plants gave him all the information directly through his meditations.

The farmers were ecstatic with the tremendous quality of cotton and tobacco they grew later but quickly grew angry because the amount of peanuts they harvested was too plentiful and began to rot in overflowing warehouses. Within a week, Carver had experimented with and devised dozens of uses for the peanut, including milk and cheese. In later years he would produce more than 300 products that could be developed from the peanut, including ink, facial cream, shampoo and soap.

He continued constantly working with peanuts, sweet potatoes, and pecans trying to produce new products. He developed more than 300 products from the peanut (including Peanut Butter), 175 from the sweet potato, and 60 from the pecan. He extracted blue, purple, and red pigments from the clay soil of Alabama. He researched the manufacture of synthetic marble from green wood shavings, rope from cornstalk fibers, and veneers from the palmetto root. During WWI, he worked to replace the textile dyes that were being imported from Europe. He ended up producing and replacing over 500 different shades. In 1927, he invented a process for producing paints and stains from soybeans. Carver also demonstrated that 100 different products could be derived from the sweet potato.

Although he did hold three patents, Carver never patented most of the many discoveries he made while at Tuskegee, saying "God gave them to me, how can I sell them to someone else?" He gave it all to charity. He freely gave his discoveries to mankind. Most important was the fact that he changed the South from being a one-crop land of cotton, to being multi-crop farmlands and brought prosperity and freedom back to the area, even though he was born into slavery. He wanted poor farmers to grow alternative crops both as a source of their own food and as a source of other products to improve their quality of life. Carver also designed a mobile classroom to take education out to farmers. He called it a "Jesup wagon." Additionally, he served as nutritional adviser to Mahatma Gandhi, agricultural consultant to the Russian government, and massage therapist for the Iowa State football team. Remarkable souls are not always awarded the recognition they deserve, yet Carver received numerous accolades. His paintings received honorable mention at Chicago's 1893 World's Fair, and the Royal Society for the Encouragement of the Arts in London elected him a Fellow. He was awarded the Spingarn Medal for Distinguished Service to Science and the Theodore Roosevelt Medal for outstanding contributions to agriculture. Two honorary doctor of science degrees also were bestowed upon him and he was awarded honorary membership in the American Inventors Society. Popular Mechanics magazine selected him one of fifty outstanding Americans, and he was elected to the Hall of Fame for Great Americans. Variously referred to as the Peanut Man, the plant doctor, or the sage of Tuskegee, Carver counted Henry Ford among his closest friends.

How did this remarkable scientist leave such an indelible mark upon our world? Certainly his scientific achievements contributed, but another consideration, largely ignored, is the fact that he was also a mystic.

"I love to think of nature as unlimited broadcasting stations, through which God speaks to us every day, every hour"

George Washington Carver's mysticism sprang from his conviction that nature held the answers to all of life's questions, and that the only requirement for obtaining these answers was a receptive ear. Carver said, "I love to think of nature as unlimited broadcasting stations, through which God speaks to us every day, every hour, and every moment of our Carver's scientific discoveries originated from a rich inner life built upon a strong faith in divine powers. His spirituality came not from participation in a particular church, but from a deeply personal relationship to the Divine. "All my life," he said, "I have risen regularly at four o'clock and have gone into the woods and talked with God. There he gives me my orders for the day. Alone there with things I love most, I gather specimens and study the great lessons Nature is so eager to teach us all. When people are still asleep, I hear God best and learn my plan."

Carver also spoke with the subjects of his scientific inquiry. He was always seen to have a flower in his buttonhole, and he explained that he talked with the flowers and they revealed their secrets to him. "How do I talk to a little flower? Through it I talk to the Infinite. And what is the Infinite? It is the silent, small force. It isn't the outer physical contact. No, it isn't that. The infinite is not confined in the visible world. It is not in the earthquake, the wind or the fire. It is that still small voice that calls up the fairies." A fellow professor and close friend, Glenn Clark, said that Carver's gift of speaking to flowers and plants sprang from love, humility, and acceptance. His humility was maintained by avoiding what he called "the 'I' disease." Carver experienced awe in his encounter with the natural world. The plants shared amazing secrets and inventions with him that have changed the world!

How is it that such a remarkable man escaped even wider notice? His willingness to publicly discuss his inspired methods of research left him at odds with the scientific community's dedication to a rational, deductive methodology. Intuition and divine revelation were not held in high esteem as methods of scientific inquiry in Carver's day any more than they are today. Yet these were the very methods he employed-and he was not prone to denying them. Carver articulated his philosophy regarding the inextricable link between scientific discovery and the mystical in a letter written in 1927: "We can only understand the infinite as we loose the finite and take on the infinite." Carver did not deny the importance of rational thought, but regarded it as a means of confirming and illustrating truths obtained first mystically. Such openness regarding his methodology did not endear him to critics, and indeed a 1924 New York Times editorial claimed that he showed "a complete lack of the scientific spirit." The Times went on to say that "real chemists" do not attribute their successes to inspiration, and warned that Carver would bring discredit to his race and to Tuskegee Institute. Strong words directed at a man whose achievements were so conspicuous.

Carver: a Man Ahead of his Time

The portrait of Carver that emerges from his writings and the accounts of those who knew him is that of a man who was precocious, not just for his time, but perhaps for our time as well. He transcended barriers of race, socioeconomic status, geographical and political squabbles, belief systems and ego boundaries, and he capitalized on a mystical relationship with his God. He integrated intuition and science to a degree few others achieved.