Esus the Bluestone Skull and the Preseli Consciousness 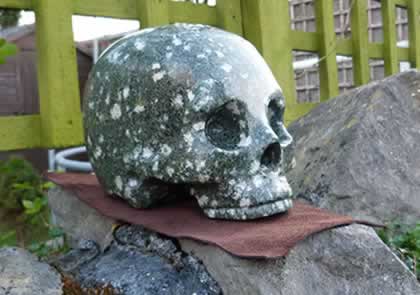 The Preseli Consciousness is a term used to describe the spirit or evolving consciousness of the Preseli Mountains (particularly the Preseli Triangle) in Wales; Stonehenge and other sacred sites in Wales and throughout the UK; Preseli bluestone; and the wisdom and philosophy of the ancient Celts and their predecessors.

Information about why and how the ancients placed the stones at sacred sites and particularly at Stonehenge and the Preseli Mountains has recently been uncovered and is starting to be interpreted with intricately detailed and meaningful findings which can have an effect on the understanding of the phenomena of sacred sites all around the world!

These findings are being presented in a holistic way by author and researcher, Neil "Blue" Clark. He has published several books on the subject. His newest book is Stonehenge Bluestone III:The Skull of Esus. These findings explain in great detail, many of the aspects of the Preseli Consciousness.

The relevance of the Preseli Consciousness for modern times is multi-fold. We begin to understand and more accurately and holistically interpret the ancient landscape in Wales and the rest of the UK. We also gain insight into other sacred sites around the world and how they interacted as a whole. We begin to realize that the ancients have a lot to teach us in modern times. This is why there is a renewal of old traditions made relevant to our ways of living and to help us "remember" how to get back to living in unity and healing with the land. Thankfully, it has come to pass that many indigenous tribal traditions are being revived and recognized all around the world. New respect is being given to ancient wisdom teachings and ways of living in balance with earth and it inhabitants. This wisdom has the potential to help the planet in extremely significant ways. Specifically through the Preseli Consciousness, the druids or ancient Celts, and earliest builders and custodians of the sacred stones are able to pass on sacred knowledge to teach us ways to uplift and preserve the consciousness of humankind. They are able to speak to us through time and space by way of the landscape and the stones, along with the energy rippling throughout all interacting pieces placed in a sacred manner.

Esus the Crystal Skull represents and embodies the Preseli Consciousness. Esus was carved from Preseli bluestone from the Preseli Mountains. He was created in a highly sacred manner with divine inspiration. Validations of Esus the skull's elevated consciousness occurred through synchronicities that transpired during his birth (or rebirth) and subsequent times. 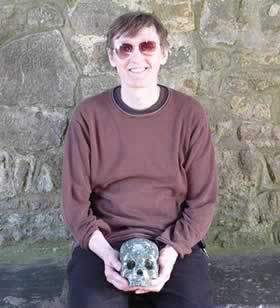 Ceremonies for his activation took place at sacred sites in the Preseli Complex. On September 28-29, 2011, a pilgrimage and ceremony took place to initiate Esus at the Preseli Complex at the Tomb of Carn Meini (aka Bedd Esus) and Caldey Island. Another inaugural ceremony and pilgrimage included the reunion of Esus and the Preseli bluestone at Stonehenge. This took place on March 24, 2012, also in conjunction with a reunion and gathering of ancient and modern crystal skulls at Stonehenge for the Spring Equinox. The skulls and their caretakers were glad to welcome and honor Esus, their esteemed brother and ambassador for the Preseli Consciousness. Later that day, Esus' pilgrimage continued on to Glastonbury for Neil "Blue" Clarks' book signing of Stonehenge Bluestone III The Skull of Esus and was followed by a trek up to Glastonbury Tor with Esus, Blue, Mark, Bart, and me (Gina). Blue is also the caretaker of Esus. Mark, Bart and I and others (see section on Custodians) are some of the custodian teachers of the Preseli Consciousness in training by Blue.

One of the most significant discoveries during the creation of Esus the skull, was that his form was already carved into the landscape as a macrocosm of the microcosm. It was discovered through Google Earth aerial photos that show there is a huge skull without a bottom jaw in the landscape at Foel Drygarn. Image The skull in the landscape misses its bottom jaw in the same way that Esus, the Preseli skull was carved. The carver did not realize this, until after the aerial photos were discovered!

Esus is further connected to Carn Meini by an ancient tomb (Bedd Esus) that once held the remains of a highly esteemed chief or Druid. He is believed to be one of the forefathers of the Druids who brought the information regarding the important philosophies of the Celts and sacred stones. Esus is the name also given to the druid in the cairn. Thus the consciousness of Esus, the ancient ancestor to the Druids, lives on through Esus: the Preseli Bluestone skull. To learn more about this you may like to read Clark's earlier books listed at the bottom of this page.

Preseli Spotted Dolerite (Bluestone) is a 480 million year old metamorphic igneous rock made up of plagioclase, feldspar and augite and is a pyroxene mineral (calcium magnesium aluminosilicate. Ca, Mg, FE, AI, (Al, Si,206) It also contains pyrite and traces of copper. Polished bluestone has a characteristic spotting of white stars or dots. The overall color depends on the cut and polish. It can appear light blue grey in its unpolished state, while polishing yields a darker color in a deep greenish black with a teal blue tinge, depending on the lighting. 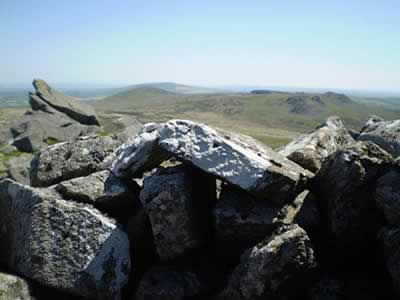 Preseli Bluestones were the stones used in the building of Stonehenge 5,000 years ago. Preseli Bluestone is found only in the Preseli Mountains of Pembrokeshire in Wales, Most bluestone is found on Carn Menyn. The biggest questions many scholars ask are how and why the ancients transported the huge stones over hundreds of miles. Ancient legends of King Arthur explain that Merlin magically moved the bluestones to Stonehenge. Modern scientists debate more scientific explanations, yet both hold pieces of the truth as a whole if we look with the eyes of the ancients throughout the various periods of history.

Preseli Bluestone tools, such as axes, have been discovered all over the British Isles, with many near Stonehenge. It had a very sacred function, while also being harder than granite and thus was a practical stone to use for heavy duty tools.

Please note that authentic Preseli Bluestone is rare and protected. Carn Menyn the only source of the stone is protected by British Law and it is illegal to take it from the mountain. A few reputable dealers had a grandfather clause on some of the stones from old mines and are still able to sell it, but some dealers may be illegally trading in the stone.

Preseli Bluestone heals ear, nose, throat and dental issues. It can provide clearing emotions, clarity of thought, grounding, heals immune system, protection, aid in meditation, charging, dowsing, psychic skills (such as channeling), astral travel, journeying to other dimensions, opening doorways or portals, strong earth energy and the consciousness of the land is imprinted within it. It is known to often feel hot with tingling energy vibrations.

A tonic for general healing is to place the bluestones in water and drink. This is an ancient custom which may also be associated with many of the sacred healing wells in the Preseli Mountains and customs of placing special stones in water for healing. Preseli Consciousness Custodians

As custodians of the Preseli Consciousness, we work with an open heart, dedication, and respect for the sacred land, its spirit, and the ancestors. We are guided in our search by the legacy of the ancestors who recorded and imprinted their history, philosophy, and healing for all times into the stones and sacred sites. This record gives us a glimpse into the web of layered meanings and interconnections of the sacred sites which held significance for the ancients. Mathematics, Physics, Engineering, Technology, Star Alignments, Healing Properties, Sacred Calendars, and the Evolution of Consciousness were all important aspects and motivations for the ancient builders and descendants.

You may also purchase books and DVD's by Neil "Blue" Clark at http://www.celtworld.co.uk/