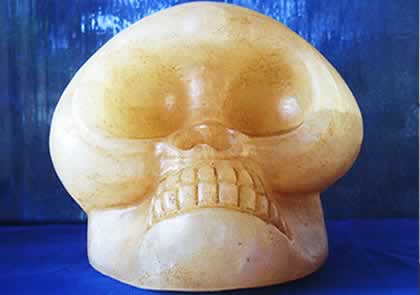 The crystalline or calcite skull has been named, through divine guidance, Leonid Regulus. She comes at this time and is named in honor of the transformation of consciousness and healing that has taken place through this organization which started 3 yrs ago during the time of the Leonid Meteor Showers of '06, Nov 17-18.

It was no coincidence that on the 3rd anniversary of ISE to the exact day, I received her photo and the honor of sharing her caretaking with those who have passed her down through history until the present and into the future. She is here now to help in the healing of souls, the environment, sacred sites, and layers of time along the lines of light (leylines) on this planet and throughout universal spaces. As a caretaker of Leonid Regulus, I wish to share her energies with anyone who wants or needs this healing for the highest good of all.

The Leonid Meteors originate in the Leo Constellation, which metaphysically and symbolically relates to the transformation of consciousness, cycles of time, as well as the leminscate of infinity, healing the grid, Christ consciousness, lion and cats from ancient civilizations. Moreover, Mongolian shamans often painted "Tsolmon" the sender of comets and meteors on their drums to invoke their power. Therefore, Leonid Regulus the crystal skull and ISE are also linked with these energies, considering the planetary alignments involved in their appearance, along with our overall mission to help to heal people and sacred places around the world.

The day that I was meditating upon the potential name of this skull, I first wrote "Leonid" and then I automatically wrote the word, "Regulus" without thinking. The next day, I synchronistically was looking at the constellation Leo- from which the leonids originate-;and I see that "Regulus" is a cluster of 4 stars within Leo- also named the "Lion's Heart." I found this is very appropriate because I realize how much the heart is connected with healing and this is very needed among many people. Furthermore, Regulus is associated with the Archangel Raphael, also considered to be an angel of healing.

As I continued to look deeper into the energies and history of Regulus, I found that Regulus (combined with Jupiter) was the same group of stars that appeared in the time of Christ's birth and is thought to have been followed as the Star of Bethlehem by the wise men! Did I know this ahead of time? No, but as this season is when we celebrate the coming of light and Christ's birth, it feels a perfect time for this crystal skull to come and to also be one way to celebrate a shift to Christ light Consciousness and new life transformation. And although I mention Christ, I want to emphasize that all faiths and forms of positive spirituality are equal in the eyes of this organization and celebrated as well.

On a personal note, I would also like to share with you another synchronicity that recently transpired. To me it was a good sign that I should be caretaker of this particular ancient crystal skull. Some people believe that those who become the caretakers of ancient crystal skulls may be recovering or reconnecting with the same ones they had worked with in previous lives. Over 25 yrs ago, my mother who channels through automatic writing, one day told me that a guide came through who had never before made his presence known. He told her, "Tell Gina, we give her the blue of the sky." That was the only message. I have often puzzled over those words and their possible meanings. Although, I have studied many religions and cultures, I had not researched Mongolian religious traditions until a few days ago. Since Leonid would be arriving soon, I felt it appropriate to study the subject, as well as stay open to any insights that might arise. I found that, "Traditional Mongols venerated heaven (the "clear blue sky") and their ancestors, and they followed ancient northern Asian practices of shamanism," along with forms of Tibetan Buddhism. While many religions look to the heavens and sky as a source of divinity, Mongolians specifically refer to this as "the eternal or clear blue sky." I find the wording of this to be very poignant and timely after all these years. Thus, it makes me feel that my connection to this Mongolian skull in particular is no mistake, and might be a lineage to which I am related. Were those words to give me the blue sky, a sign of some past life in Mongolia? Was my discovery of the significance of the blue sky to Mongolian beliefs, at the same time as Leonid's arrival into my care, a cue so that I would recognize my upcoming responsibility to help others? My inner guidance or intuition affirms this and I can only choose to perceive this as a gift of spirit, and not a random occurrence.