The Healing Properties of Crystals 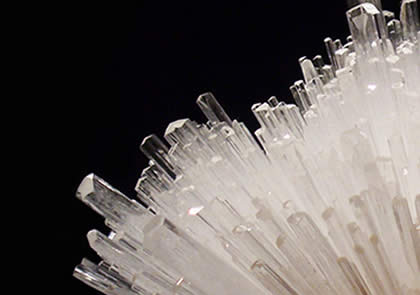 The energy of quartz crystals has been used for many thousands of years. Working with and using crystals is not a new concept and there is archaeological evidence to suggest that it was used by shamans as far back as 10,000 yrs ago. Legends also speak of crystals being utilized by the advanced civilizations of Lemuria and Atlantis.

Ancient peoples knew crystals were magical and had powerful healing qualities. Throughout history they were used in priests' and priestesses' headdresses and breast plates. They also used other precious gems. Descriptions of such regalia are written Biblical texts. Many Native American healers also use sacred stones such as turquoise, agate, and meteorite and carry quartz in their medicine pouches. Shamans from Peru, also work with crystals in healing in order to work with extraction and lightning, as well as to bring down energies from the Upper Worlds. The aborigines believe that clear quartz crystal is solidified light that holds the Great Spirit. Records of the healing properties of crystals and gemstones date back to when humans first inhabited the earth. The Bible mentions quartz and other healing stones over 200 times.

The structure of the human body and quartz crystal is very similar. On a cellular level the human body is silica. Quartz crystal is also made up of silicon, water and oxygen. In essence we are liquid crystals. Crystals are found in computer screens (as liquid crystal), record player needles, watches and other devices. Quartz radios were once used because of the way that quartz can act as a transmitter and receiver of information. Chips of quartz are used to store information in computers. It has the ability to store immense amounts of information.

In every sense of the word, Quartz is a stone of power. It is considered a "universal" stone because it can be used in so many ways. It is considered a Master crystal because it enhances and amplifies the energy of all other stones and can be utilized in its many geometrical forms for deep healing. It also is a channel for universal energy or spirit. It energizes, cleanses, clears, and at the same time, is protective against negativity.

Quartz enhances spiritual growth and healing no matter what tradition you are working with. It helps to clear the mind and heals wounded emotions. It can also inspire creativity, concentration, and assist n manifestation of goals and dreams. Further, it awakens psychic senses and is good for work with past lives, journeying, and intuitive readings. The benefits of quartz crystals are almost limitless. It is an essential tool in a healer's medicine kit.